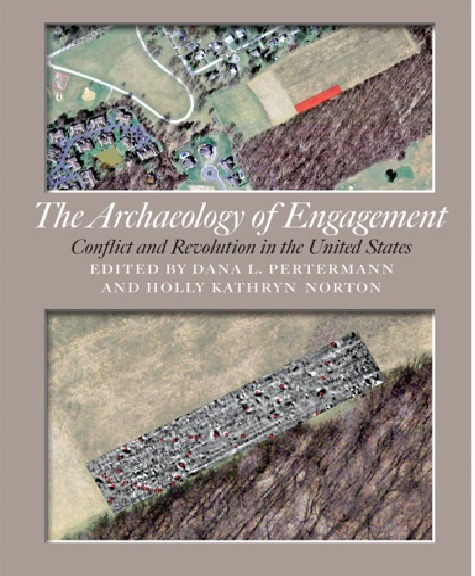 “The Archaeology of Engagement: Conflict and Revolution in the United States”

When a historic battlefield site is discovered and studied, the focus is often on the “hardware”: remnants of weaponry, ammunition, supplies, and equipment that archaeologists carefully unearth, analyze, conserve, and frequently place on display in museums. But what about the “software”? What can archaeology teach us about the humans involved in the conflict: their social mores and cultural assumptions; their use and understanding of power?

In The Archaeology of Engagement: Conflict and Revolution in the United States, Dana L. Pertermann and Holly Kathryn Norton have assembled a collection of studies that includes sites of conflicts between groups of widely divergent cultures, such as Robert E. Lee’s mid-1850s campaign along the Concho River and the battles of the River Raisin during the War of 1812. Notably, the second half of the book applies the editors’ principles of conflict-event theory to the San Jacinto Battlefield in Texas, forming a case study of one of America’s most storied—and heavily trafficked—battle sites.

Conflicts, battles in particular, are events that were purposeful, meant to change the present in which the participants lived. Culturally contingent, and often having unforeseen consequences, conflict-event theory recognizes that battles provide rapid social change akin to punctuated equilibrium, complementing a more gradual, daily process of cultural change. As many of the contributions illustrate, archaeology provides new insights to the understanding of battles that traditional historiography is often unable to access. While this book focuses on American battlefields, it will also contribute to the ever-expanding research of cross-cultural violence and warfare.

DANA L. PERTERMANN is associate professor of anthropology and geology at Western Wyoming Community College in Rock Springs. HOLLY K. NORTON is a compliance manager for the Colorado Office of Archaeology and Historic Preservation in Denver.

Dr. Roger G. Moore has worked as a professional archeologist since 1976.  He was a pioneer in demonstrating the potential for survival

of significant archeological remains in heavily urbanized American contexts such as the City of Galveston and the Houston Central Business District, as well as in developing the archeological field methods appropriate for dealing with urban contexts. His work and publication in urban archeology began during his graduate studies at Rice University and has continued throughout his subsequent career. Moore initiated an independent archeological consulting practice based in Houston, Texas, in 1982.  His firm has conducted over 500 major archeological projects and many smaller investigations.  These projects were conducted for a very diverse array of endeavors including original historical and archeological research, highway construction, mass transit, park development, energy projects, oil spills, flood control, real estate development, industrial development and conflict archeological research at the San Jacinto Battleground.  Moore is also keenly interested in spatial relationships and developed a quantitatively based predictive model for prehistoric settlement in Southeast Texas that has been acknowledged as accurate by the Archeology Division of the Texas Historical Commission.  While now eclipsed by the Texas Sites Atlas, his firm had its own internal GIS project of prehistoric site locations, survey areas, historical markers, and other relevant geographical loci in this region years before the introduction of the Atlas. Moore’s presentations and peer-reviewed publications in recent years have centered upon his firm’s conflict archeological discoveries at San Jacinto.

Douglas Mangum M.A. is a Principal Investigator and Historian at Moore Archeological Consulting. In those capacities he co-manages the work the firm has conducted at the San Jacinto Battlefield. Before joining the firm he worked for the U. S. Forest Service and in various volunteer and student projects that took him to sites in Scotland, England, Mississippi, and New Mexico as well as Texas. Douglas earned his BA in Archeology at the University of Texas and an MA in History from the University of Houston–Clear Lake. Douglas’ master’s thesis focused on American expansionism in the early nineteenth century, particularly as it applies to Texas. This historical focus and his research into the Battle of San Jacinto, in combination with his archeological work at the battlefield, has resulted in his chapter in the book The Archaeology of Engagement, Conflict and Revolution in the United States